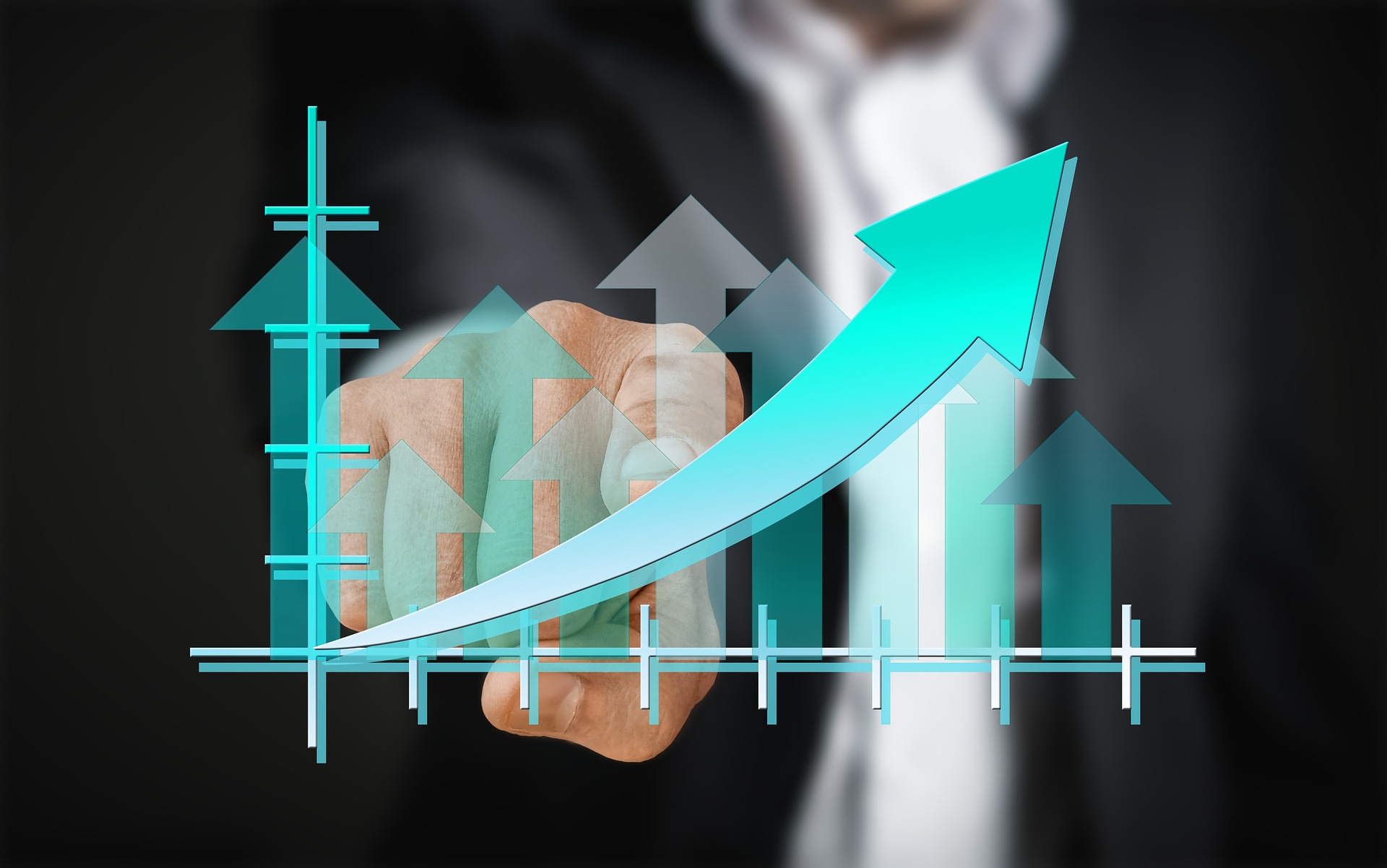 As my morning coffee brews, I get a text message from an old colleague from a long time ago. Let’s call her Helen. My eyes still bleary with sleep, the words of Helen's text become clearer. It appears her services are no longer needed at the company where she and I met as colleagues seven years ago, where she has remained a dedicated employee since.

Helen is a great manager, focusing on logistic processes. Her work is to make sure that all of the necessary material is in stock—but not too much. Just enough for two of the days of production. Her typical work consists of Excel spreadsheets that predict and manage quarterly demand.

Recently, though, there has been a shift in the company’s pace. Every month the pulse becomes faster, and Helen has started to get the sense that her skill set may be in jeopardy. The target goal of her work—set by her manager using some CRM tool designed to get maximum efficiency out of employees—kept going higher and higher. She realized that even keeping on top of things at a quarterly rate had become too slow. Reading her texts, it’s like I can feel her anxiety through the phone screen.

Helen reached out to me because she knows that I am a futurist. (Otherwise known as a geek!) She asked me what skill set to learn.

I sat back for a few moments, speechless, as the weight of the situation sunk in before I even had my morning coffee. I wrote back that I wanted to give her query some deep thought for a few days before responding. While Helen's case is just one case of how we are living in an accelerated era, it is happening to so many people, across so many different industries. Companies need to compete at faster and faster rates. It won’t give you any rest.

If you sit with this for a moment you know it intuitively to be true: The future is coming on fast. We can all feel it.

Digital makes everything go faster. That’s all. If you are not ahead of the curve, you are already too late.

You can see this with customer behavior, as just one example of this vastly far-reaching phenomenon. Because of social media, customers’ tastes and behavior change almost every two weeks. If you don’t follow through quickly, it’s too late.

Because of the speed of changes, things that we are used to happening over the course of six months or a year now happen so rapidly—it could happen even tomorrow.

Here is an example: before AI, a business owner would likely rely on their Chief Marketing Officer for insight into the pulse of their industry. They would be correct to do so; the CMO is usually pretty accurate at reading the changes in the industry. It is their job, after all.

However, in the past several years, technology has accelerated the pace of business to such a degree that it is no longer feasible to rely on human intelligence alone to create strategy for business. As just one example, take the fashion industry. The emergence of fast fashion, which relies on trends that shift every three months, has made it impossible for companies lagging on the technology front to keep up.

Once a company goes digital by starting a website and using email, the data that’s coming in is like a tsunami. It’s impossible for humans to keep up with the pace of the data coming in, to synthesize it and made calls as to what to do next for the business. There’s simply too much to process. By the time humans can look at and process all the data that has come in, and begin to implement some strategies that take it into account, the market has shifted again.

What is the future of jobs?

The speed of innovation that is happening in business right now requires changes to every level of a company. There are three types of work that make up any business: Rote work, decision making, and creative work.

In the old paradigm, rote work typically made up about half of the work any business did, with the rest of the energy split evenly between decision making and creative work. However, in the future, anything that can be repeated and written will be automated. AI will eliminate almost all repetitive jobs (i.e. rote work).

The World Economic Forum, in its 2018 Future of Jobs report, found that nearly 50% of companies expect to reduce their full-time workforce because of automation by 2022. 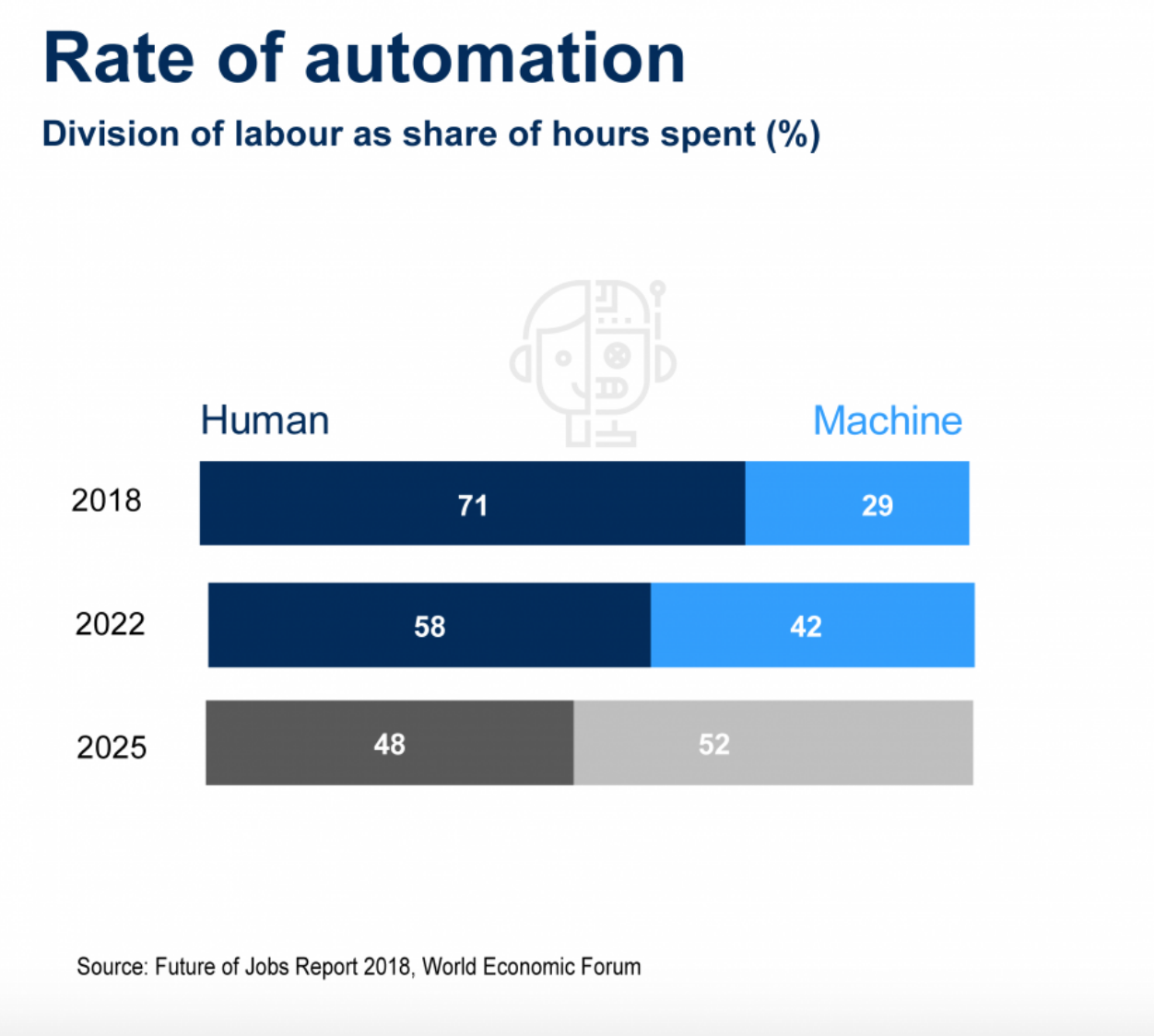 This is the silver lining: While rote work is going away for humans, the structure of business after automation will shift so that humans will be responsible for more creative work and decision making. This can potentially mean more humans getting to do work that excites and engages them.

Regarding the transformations coming to global labor markets due to technology, the World Economic Forum’s report reads, “These transformations, if managed wisely, could lead to a new age of good work, good jobs and improved quality of life for all, but if managed poorly, pose the risk of widening skills gaps, greater inequality and broader polarization. In many ways, the time to shape the future of work is now.”

In other words, there is an opportunity to make this shift into the Fourth Industrial Revolution a truly great chapter in the history of humanity, but we have to rise to the occasion and make it so.

There will be work for humans in the future, it’s just unclear exactly what that work will be. While there are plenty of predictions for what jobs of the future will be—AI Psychologist and Extinct Species Revivalist are a couple science fiction-sounding options that we could be reading on business cards before too long—to me, the main thing about the future is that we can't predict it. It is uncertain.

The mindset for the future

In the book Sapiens (one of my favorites), historian Yuval Noah Harari argues that it was the exploratory mindset that led to European dominance over the world. Other empires, such as the Chinese and the Ottomans, had far greater military and economic power in the 18th century. Yet, it was the Europeans' quest for understanding that made the difference.

To explore, you must be able to take comfort in experiencing repeated failures and feeling lost all the time. We find the accomplishments of the great explorers from history so impressive precisely because they didn't know what they were getting into. Even with so many unknowns, they dared to venture forth. 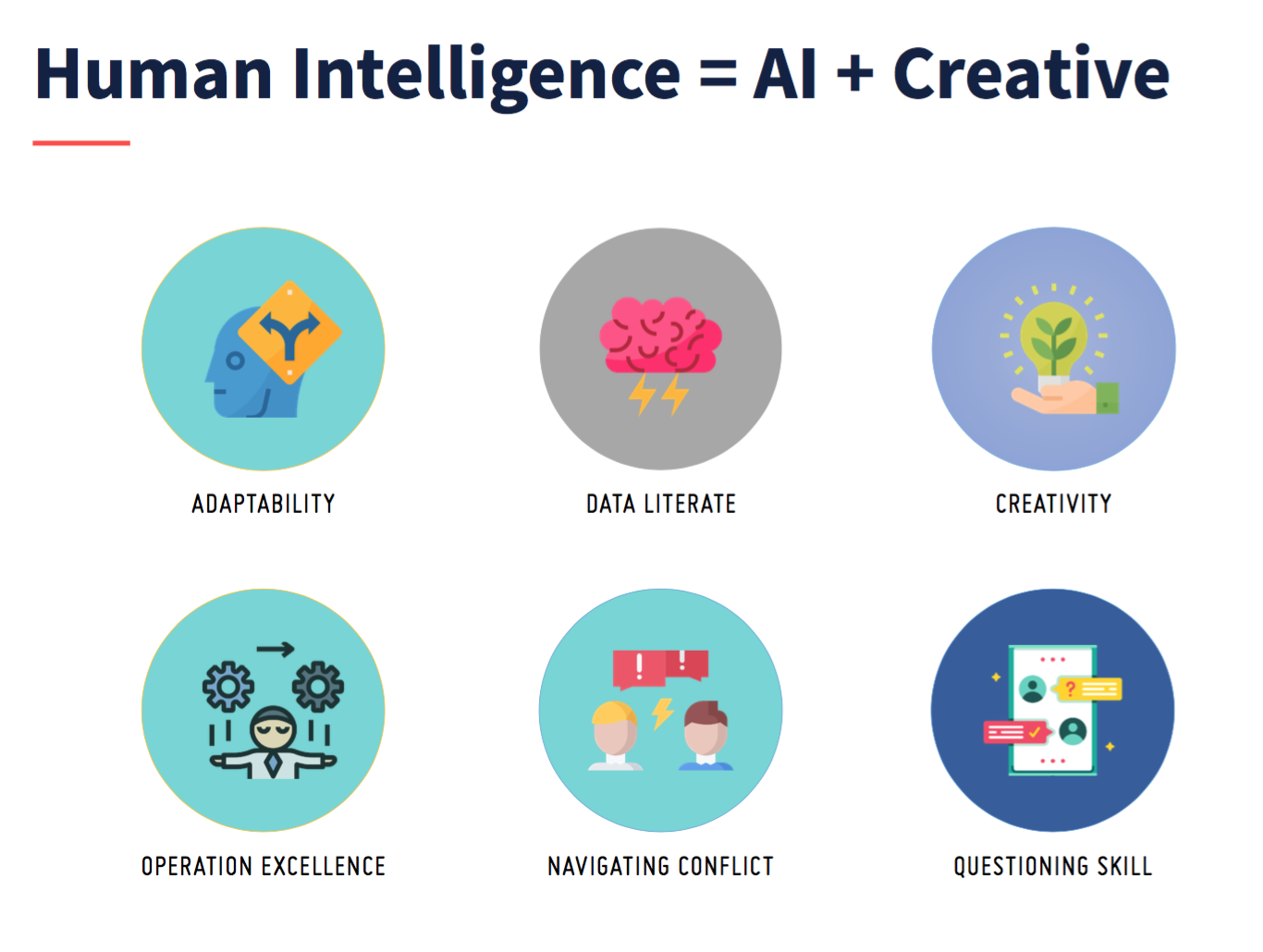 That brings me back to Helen's question. After mulling it over for days, I started to realize that the answer is not a rigid list of skills, but more of a mindset. While there are definitely skills that will help you be more effective in the AI era (see above) there is, above all, one mindset that will be necessary.

With so many changes happening daily, one of the outcomes is increased uncertainty. Dealing with uncertainty is not about making lists and trying to project a five-year horizon. In the age of uncertainty, no one is an expert. Instead, we must be able to figure it out as we go. We have to be like the explorers and sail straight into the uncertainty.

To be successful, I realized the main “skill” to develop is a mindset of being excited about uncertainty.

I really mean excited. It is not enough to be able to tolerate ambiguity and uncertainty—you have to turn fear into excitement, and when you see uncertainty you have to run straight into it.

That’s my challenge, and I invite you to take it on as yours, too. To me, this quality is the essence of the future of jobs.

Is Your Business AI Ready?